UJIN LEE
site-specific projects > 17x17 squares, 2011
17x17 Squares was a site-specific public project at Thomas Paine Park in New York City on October 21, 2011 by Ujin Lee. This was her third collaborative project with the New York City Department of Parks & Recreation for its Art in the Parks program.

17x17 Squares consisted of a performance and installation involving viewer participation of the general public. The performance started with Lee and three other artists—Richard Humphreys, Emi Inoue, and Pitchamon Saengpo—tying together 289 pieces of traditional Korean wrapping cloth, or bojagi. After the four-and-a-half hour performance, all the cloths had been tied by each of their four corners and lay flat to form a larger square, 17 cloths on each side. The public was then invited to untie the individual cloths and take them home.

For this project, Lee collected 289 pieces of bojagi cloths over the summer from households in her hometown, Seoul, South Korea. Each cloth was square in shape but varied in color, size, and pattern. Bojagi has been used for wrapping and carrying goods in Korea from time immemorial. Koreans have long believed that wrapping objects with bojagi not only shows respect but also brings good fortune and luck. Most importantly, this traditional wrap is not only practical, but also a sustainable and eco-friendly article due to its nearly endless reusability.

This public project was made possible in part by the New York City Department of Parks & Recreation. It was supported by Taejung Industrial Co., LTD. Special thanks are extended to individual supporters on Kickstarter. 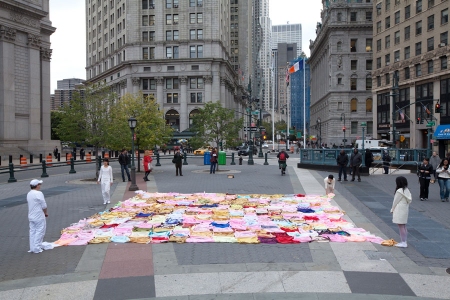 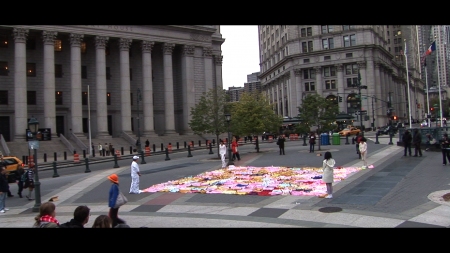