This project featured a performance, an installation, and a public participatory event. Lee carried out a three-and-a-half-hour performance of carrying 777 hand-carry-sized boxes one by one and placing them in random groupings in front of the Arch. Each box was wrapped with traditional Korean wrapping cloth, or bojagi, made of satin. When the boxes were all in place, the public was welcomed to walk through the installation. After one hour of viewing, visitors were encouraged to take the bojagi-wrapped boxes with them where they could reuse it in their everyday lives. After one hour, all the boxes were taken away, leaving the space empty again.

Through this project, it was the artist’s intention to share with the public one small and graceful thing we could do to save the planet, as well as to introduce the traditional Korean philosophy of living in harmony with nature.

Bojagi has been used for wrapping and carrying goods in Korea from time immemorial. Traditionally, people believed that the careful wrapping of objects not only showed respect but also brought good fortune and luck. Most importantly, this traditional wrap is not only practical, but also a sustainable and eco-friendly article due to its nearly endless reusability.

This project was made possible in part with public funds from the Manhattan Community Arts Fund, supported by the New York City Department of Cultural Affairs and administered by Lower Manhattan Cultural Council. 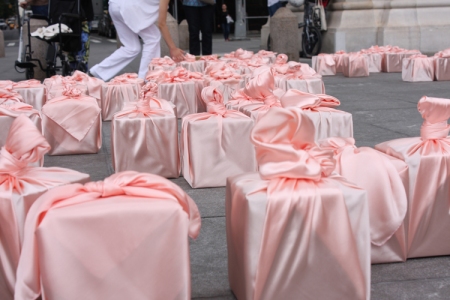 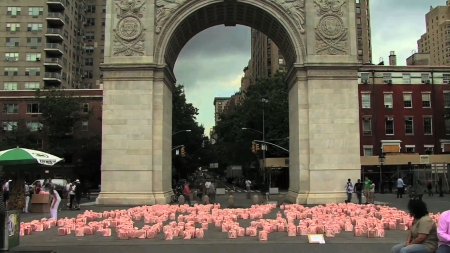